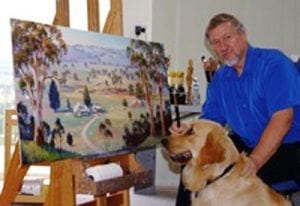 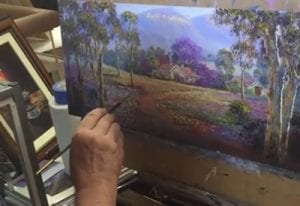 John Bradley in the Art Studio 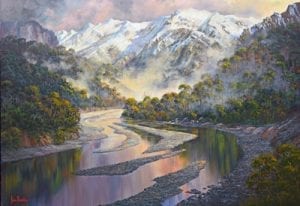 Born in Sydney in 1945, John’s early life was something of a Huckleberry Finn existence. Surrounded by large tracts of land, parks and river he was relatively free to roam during his schooling years, and explored the surrounding areas extensively developing a love of nature in the process, and a familiarity with many of its aspects.

John’s early drawing skills were evident even at four years of age when he would attempt to capture many of the scenes that he saw on holiday, and around where he lived, on large sheets of butcher’s paper.

By age 11 he was entering and winning art competitions at the local theatres and schools, winning free movie tickets for himself and his friends. Many of his holidays were spent with friends and relatives in such diverse locations as Glen Innes, Kurrajong and Narrabri. Opal mining at Lightning Ridge, gold fossicking at Bathurst or bushwalking our famous Blue Mountains: all these activities provided a rich source of imagery and experiences which would lie dormant from an artistic point of view for many years.

Having completed his schooling John went on to become an avionics engineer, a soldier, an aircraft inspector and electronic sales engineer before moving into a management career in sales, marketing and advertising. It was in his role as national advertising and marketing manager that John’s interest in art was strongly aroused once again. Working closely with advertising agency freelance artists and magazine editors he was often called upon to produce layouts in rough form or occasionally in finished art. This led to his helping a friend teach “Painting For Pleasure” classes of an evening and to develop his own painting skills in the process. There was news of an imminent takeover bid on the company for whom he was working, so in 1981, John left corporate life to take over the small art school in Sydney’s western suburbs. Under John’s enthusiastic guidance it grew rapidly in the first few years to nearly 300 students. In a short time John employed two teachers, a gallery manager and art supply shop. He eventually took the time needed to pursue his own painting career and in 1991 the school was scaled down to a few classes for advanced students, which was run from his home studio. Soon an agent was appointed. In 1993 he stopped teaching to paint full time which fast tracked his painting skills, prices and popularity as an artist.

John is currently preparing to teach small classes again, this time, from his studio on a small farm in the Hunter Valley of New South Wales. The studio looks out over the rolling hills of the Paterson Allyn Valley near the picturesque village of Vacy, providing a never-ending source of artistic inspiration. John is recognised as one of Australia’s most versatile artists with subject matter including but certainly not limited to Australian landscapes and seascapes, early 20th-century street scenes, night scenes, misty morning scenes, sunsets and sunrises, locomotives, aircraft and ships, Blue Mountains and figurative work.

Working in oils, his techniques range from traditional realist work through impressionistic pieces with lots of broad brush and palette knife techniques to semi-abstract and posteresque figurative images.

“Painting is wonderfully therapeutic and allows us to develop higher emotional creative aspects of our nature, which might otherwise have lain dormant for a lifetime. As a meditator of some 35 years or so I find the right brain artistic creative process is quite similar to meditation. Time seems to fly when one is in the groove and a sense of well-being which can border on the joyous at times keeps me at the easel much longer than is physically comfortable.
There are a number of tried and proven exercises to creating the shift to right brain and I would encourage any artist at any stage of their career to at least try some of these prior to commencing a painting session. Not only does it put one in the right space for painting but it can also help to remove unwanted distractions and background thoughts. I can honestly say I have never been at a loss for something to paint since utilising these techniques.”

John Bradley is one of Australia’s most published artists. His works appear on limited and open edition lithograph prints. Also on Giclee printed, archival quality, paper and canvas prints. These are mostly available in limited editions, although there are a small number of Giclee open editions available.
You may view and purchase these prints on our prints page >>

John’s work is consistently sought after by investors and collectors looking for long term gains or a legacy to pass on to their children. His work is included in collections here and in the U.K Ireland, U.S.A. Canada and New Zealand